Mark Burrows
Working party news
3128 Hits
0 Comments
We have previously reported on the work done in the radiator compartment of 50030 once the radiators were originally lifted out to allow the compartment to be refurbished. We had hoped that we would be able to lift the radiators back into 50030 following their refurbishment somewhat sooner than now but a combination of bad weather and other factors conspired against us. Taking the roof off 50030 and performing a delicate lift in bad weather was obviously out of the question. However on 20th April 2018 we were able to take advantage of a fine and wind-free day to lift our refurbished radiators back into the locomotive. These are the first of the overhauled major components to be replaced in 50030, the other overhauled items, ETH Generator, Auxiliary Generator, two motor blowers, two exhausters and the radiator fan motor are all still stored off site. The radiator reinstall was probably the most complicated day of work that we have undertaken to date, with plenty of scope for going wrong, and is certainly the most stressed I've been since the day that the ex-50008 power unit was delivered. Fortunately we had managed to muster a good collection of helpers, with 8 members present for most of the day, so plenty of hands to help out, along with of course the Hi-ab and professional operator.​

The initial preparation tasks were simple enough, removing the tarpaulins from the roof of 50030 (which have done excellent job of keeping it dry inside), lifting the radiators off the roof of the container, removing their protective packaging and moving them to a position along side the locomotive. We then had to fit the four new drain valves into the radiator room floor, these couldn't be done before the day, as the pipe off them needed to be angled to match the pipes that were to be fitted to the bottom of the radiators. The first radiator was then lifted to the vertical position, and sat on two sleepers; still with the straps attached the two drain pipes were fitted to the base of the radiator. Again this had to be done on the day, to allow final adjustment, and also because when lifting the radiators to the vertical position, if the drain pipes are in place the full weight of the radiator would rest on them as the radiator turned. It was then a case of lifting the radiator into position, which sounds simple enough, but when you consider that there is only a couple of inches clearance around the radiators which are about 8ft x 6ft, and there are numerous items around to either be damaged, or damage the radiator elements, it was a very delicate lift operation needing a skilled Hi-ab operator and some steadying ropes and hands.

To add to the difficulty when the radiators were virtually landed, two silicon pipes had to be connected between the pipes on the base of the radiator and the drain valves in the loco floor. This was not an easy task and involved a lot of cursing as they are a tight fit and difficult to get in place. The final complication is that the radiators are being lowered onto four studs which only allow a few millimetres spare, also if the threads on these studs had been damaged replacing them would have been a major set back as they are welded to the floor and pass through the rubberised radiator mounting pads.

To try to avoid damaging the threads on the studs, we placed some copper pipe over the studs to help guide the radiators on and assist with alignment, however, although an excellent idea in theory, the vagaries of class 50 construction meant that once the radiator was in place the copper pipes could not be removed, as they took up some of the tolerance which was essential to landing the radiators. After a couple of failed attempts we risked putting the radiator straight on to the bare stud which fortunately by being very careful was achieved without damage. The first radiator took two and a half hours to land. Once bolted down, we had a break and then attempted the second, which only took about 40 minutes (without the use of the copper pipes). 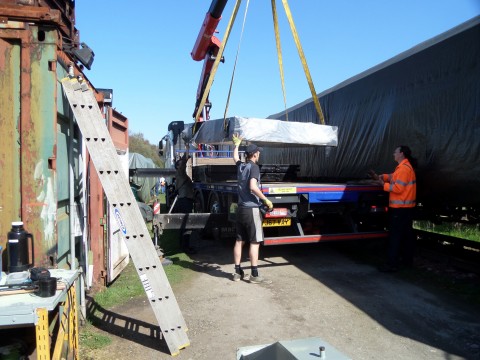 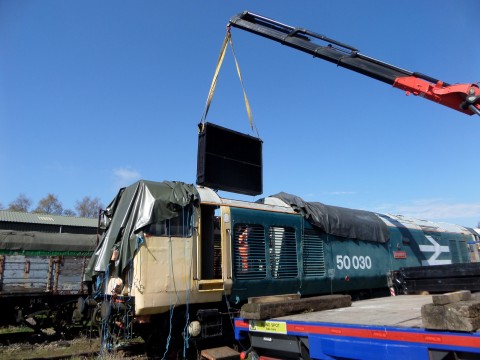 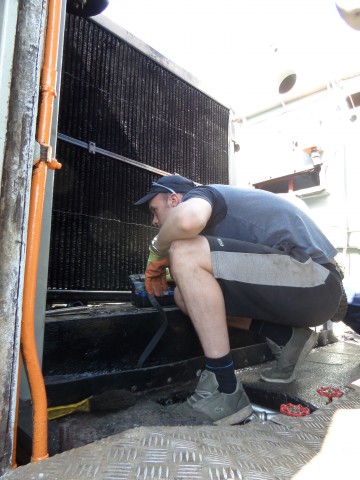 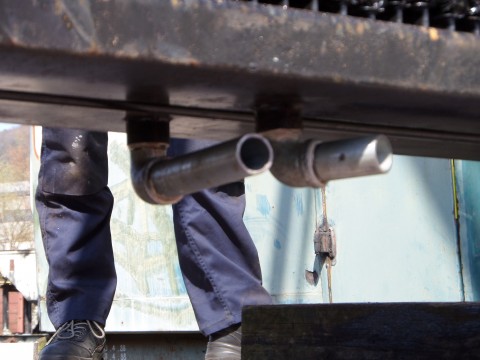 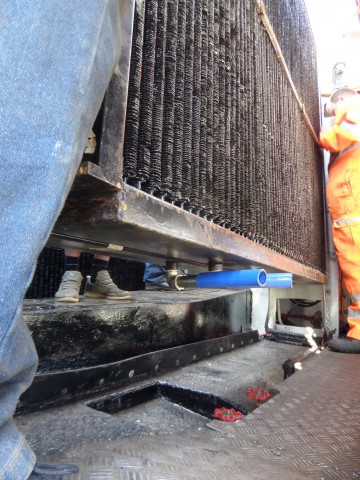 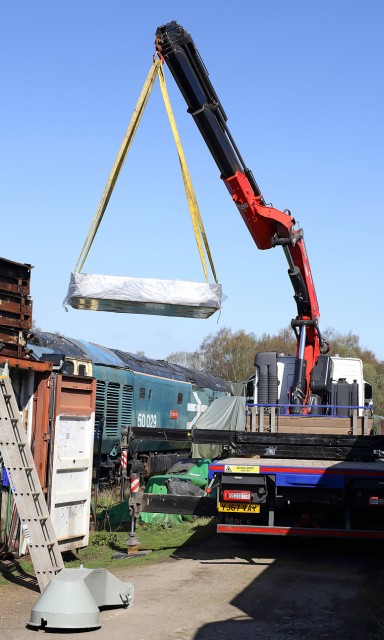 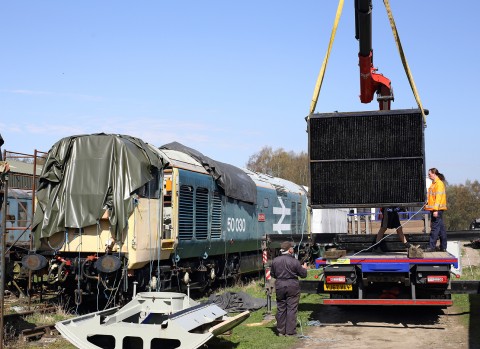 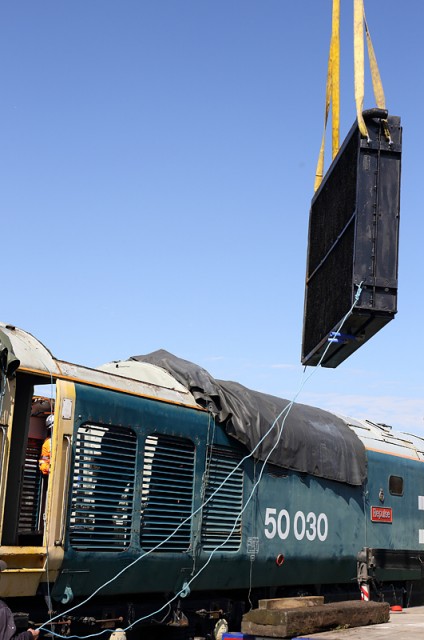 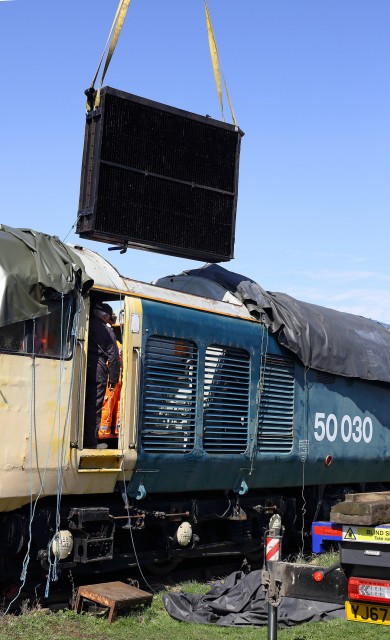 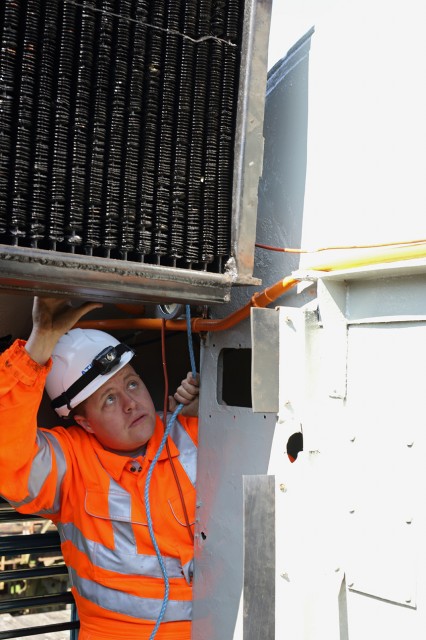 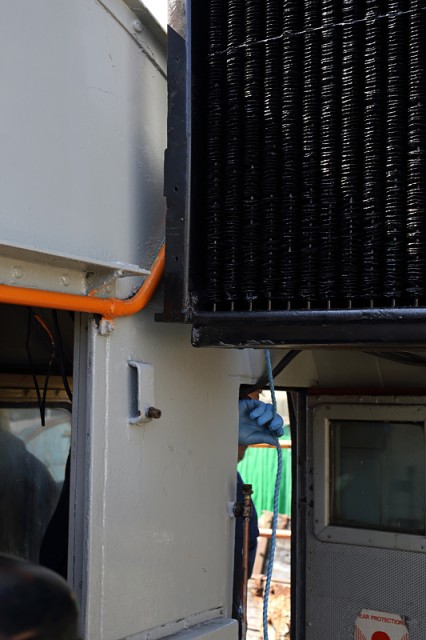 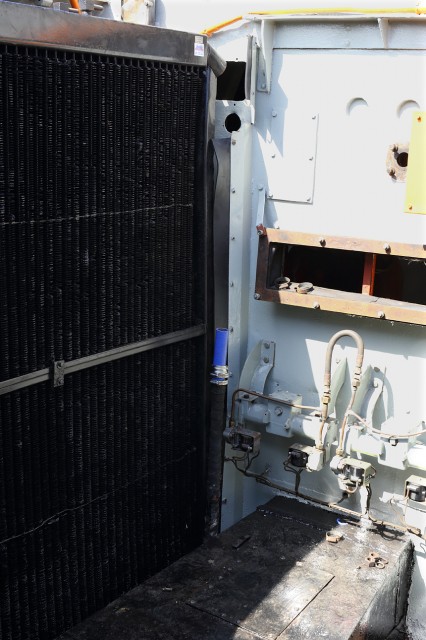 ​The next task was to lower the traction motor duct into the radiator room, and then the final job was to put the roof back on. This in itself was a tricky operation as to allow for the draught divert rubbers to be fitted to it, along with the eight breather pipes and work to be done on the header tank, along with painting, etc, the roof had been inverted. It therefore needed turning back over, without damaging any of the aforementioned equipment, or the edge of the roof. This was achieved by a very careful lift and some carefully positioned pieces of timber. The roof was then lowered into place, which by its nature is a very tight fit, and involved trimming back some of the newly fitted pipe fastenings, etc, But the good news is it went on well. It will need lifting a few were inches again soon, to allow replacement felt and allow insulation rubber to be fitted.

The last task was to drop the roof cowling on, which was found to be a very poor fit (and will need some reshaping), and then the tarpaulins were replaced. A long day therefore ended at about 17.30, the Hi-ab having been on site for seven hours. Definitely a tiring, but rewarding day.