As long-term followers of RRRG will know, for some time now we have been investigating the remanufacture of CU2 field divert units to replace the ones missing from our locomotives.  Our contractors for the job, Industrial Electronic Services Ltd, had analysed a genuine CU2 kindly loaned to us by another Class 50 owner and were confident they could reproduce the circuitry and components in the unit, using modern equivalents where possible/necessary.  They had however hit quite a snag when it came to replacing the little relay in the original unit.  The CU2 is a really amazingly compact piece of equipment for mid-1960s electronics as seen in the photo of the loaned unit below.  The relay in question is the small black box seen in the centre of the picture.  It switches at the operating voltage of Class 50 auxiliaries, namely 110v DC which brings about the problem of how to find a modern equivalent.  Electronics is obviously one area where technology has progressed leaps and bounds in the near-half century since the Class 50 was constructed by English Electric and relays to operate at such high DC voltage, let alone such compact ones (it appears the original was custom-made for EE by ITT) are almost completely obsolete these days.  Most modern relays, even of a size too big to fit the case, would burn out very quickly if asked to switch 110v DC. 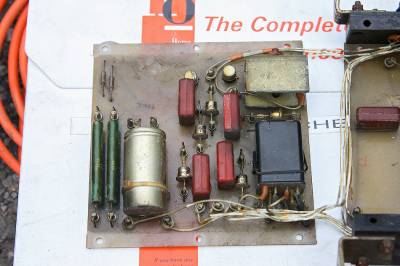 We thought about various ways to overcome the problem.  Inverting the current to AC, using an AC relay and then rectifying it back to DC was suggested but dismissed as impractical.  50030 Electrical Officer Andy Rowlands suggested using a spare NR28 relay, as used elsewhere in the locomotive to switch 110v DC.  It wouldn't fit in the box for the CU2 (and the CU2 is deliberately designed to be compact as it fits into a very tight space in the cubicle) but Andy reasoned it could be mounted externally and wired in.  We supplied IES with a couple of NR28s to test the theory and they agreed it would work but felt the new divert unit would need some circuit modification if it were to be used.  IES decided to have another look at the relay market and managed to source a relay from the US which has a 24v coil and can switch up to 220v DC.  IES ordered a number of these relays on our behalf and have now advised us that they have arrived and appear to work fine in our 110v DC application.

We now expect progress to be rapid on the rebuild of these electronic units.  IES have invited Andy to inspect the new relays in person the first week in March and if approved by us, IES expect to finalise the design within the next couple of weeks with production of the two units requested following imminently thereafter.

A full description of the electronic units in a Class 50, and how many of each type RRRG has, can be found in RRRG newsletter Issue 23 (Autumn 2011).  Since that article was written, we have acquired one original CU2 from another Class 50 owning group however we still intend to have two units built by IES to cover for possible future failures.