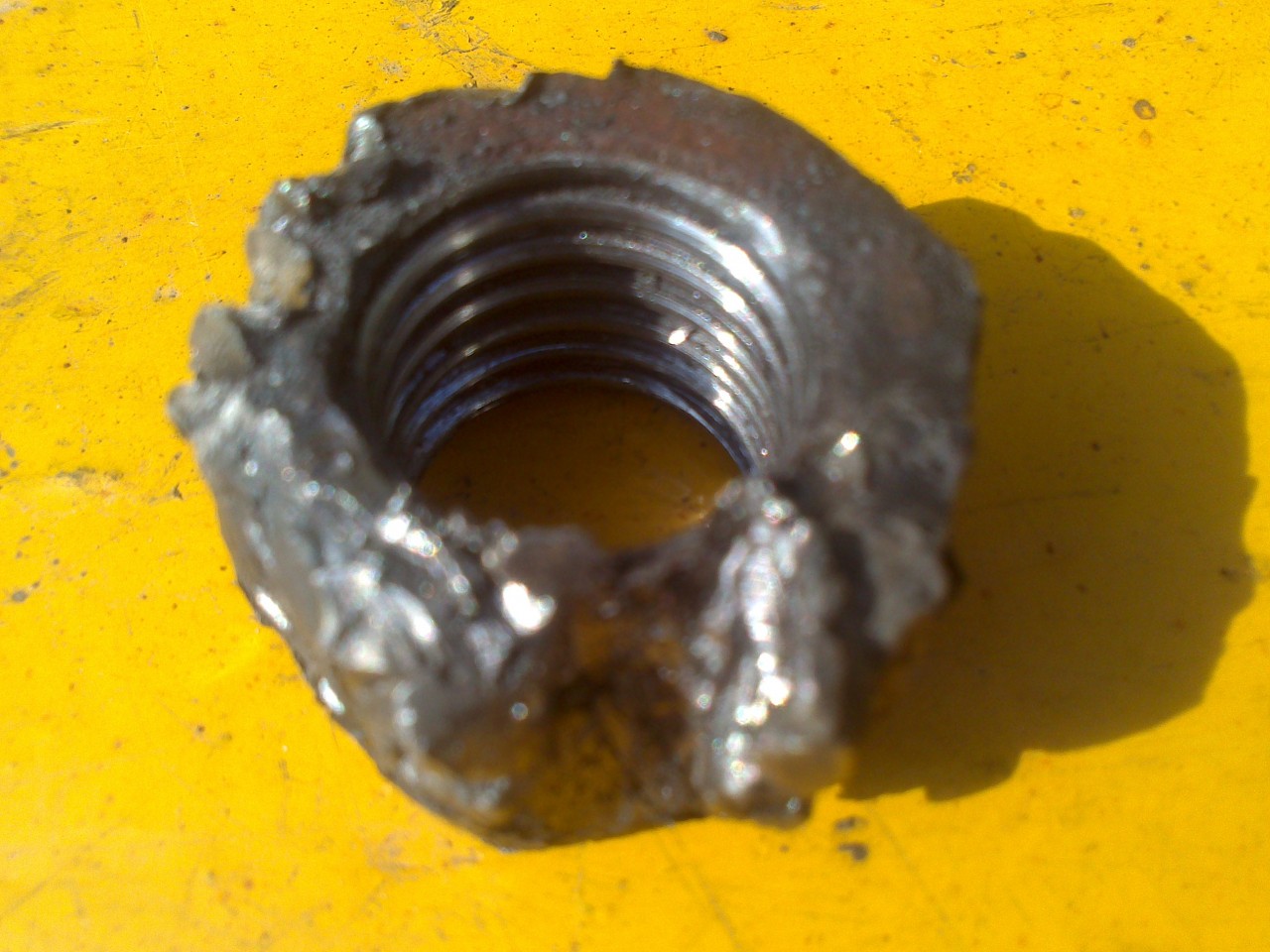 No, we haven't packed up and ceased to exist.  Yes, we have been a bit quiet.  Sorry about that - normal service to be resumed but a number of us have had things other than RRRG to deal with and our day lives have got in the way.

Ian Kemp and Dave Rolfe decided today to tackle a job we started some time ago but ended up leaving to another day.  This was to remove the remaining radiator securing nuts, so that we can lift the radiators out of 50030 and have them sent away for overhaul.  Given that the radiators were most likely last removed at refurbishment in the mid-1980s it goes without saying that the fastening nuts were stuck on very firmly indeed.  We had previously managed to remove three of them, leaving five left to do.  A potent combination of elbow grease, tools (and broken tools), purple language and in the case of one particularly stubborn nut, chiseling has now freed all eight nuts and the radiators can now be lifted out.  It's the seemingly little tasks like this that end up taking so much time.  Photos courtesy Ian Kemp. 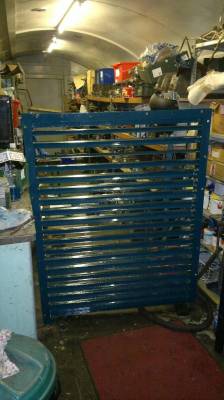 Work on site over the weekend of 13-14 June comprised efforts by Dave Rolfe to finish off the last set of radiator grille louvre frames and slats.  These have now been sanded and painted ready to reinstall into 50030 and will mean the locomotive has a fully overhauled set of radiator slats, together with the mechanisms for actuating and moving the temperature-dependent sets fully overhauled and operational for the first time in many a year!

Also on site were electrical officers Andy Rowlands and Steve Tripp, together with Sarah McCall the membership secretary.  They carried on with the donor electrical cubicle. Following recent progress with removing the control units, attention turned to the wiring loom which we also intend to salvage in order to replace the damaged wiring in 50029.  Initially the complexity of the loom and its many tentacles proved frustrating but Steve and Andy have devised methods for transferring it into Renown. All the cabling in all the side sections of the cubicle, namely that for KV10s, relays and control units, has been pulled out of the frame or into the middle section where it is more accessible.  One more visit should have the whole wiring loom out and hopefully soon into its new home in 50029.  We can then consider our options for the bulky frame of the donor cubicle which is taking up valuable space on site.

Work over the weekend of 29-30 June involved stripping and painting the last of the louvre mechanisms for the radiators in 50030, hopefully to be refitted in 2-3 weeks.  Photos to follow.

Mark Burrows and Dave Rolfe were on site over the weekend of 4-5 May.

Dave came to Mark's house on Sunday morning, and together they loaded five fire bottles in to Dave's car, and put three in Mark's.  This took somewhat longer than expected: over an hour to load up! However this was partly because one of the bottles was full and they decided to partially blow it down to make it a bit lighter. The fire bottles are now stored on site at Rowsley.  They originate from scrap 37s at Booths and are probably in better condition and easier to recertify than the ones already inside 50029 and 50030.

Wasps have attacked one of the wooden blocks under the ex-50008 power unit, which is now not too healthy. We had a choice of either getting a mother of a crane in to lift the power unit and replace the block, or do something else. After giving it some thought, Mark devised a brace that should stop the wooden block collapsing.  We have bought some 10mm thick metal plates from Booths, who cut them to size for us, but they now need drilling.  Mark picked them up and took the plates to Bowers last week. At Rowsley we have some inch threaded bar, with nuts and washers. Mark's idea is to use this, with some that Bowers are going to buy for us, to fasten the plates either side of the wooden block.  Mark intends to take it to Bowers to show them what we are after.

Chris Thorn also asked Mark to take some air horn back plates to Bowers to get them drilled out to accommodate class 37 style air horns, so he picked them up this morning, and will take to Bowers with the threaded bar.

Whilst on site at the weekend, Mark also removed five sections of conduit from 50029 (basically to allow access to a piece that were wanted for 50030.  He has removed the section that we actually want to use in 50030 and has cleaned it up and fitted it in 50030. The damaged section from
50030 that this section is to replace, has also been cleaned, as Mark intends doing a "cut and shut" on it, to use it in 50029.

Dave has been internally cleaning oil and water pipes off the ex-50008 power unit; the oil pipes are full of sludge and the water pipes have a
significant amount of loose rust in them. He has also been painting some of the large mounting brackets off the power unit.

Our gas bottles on the trolley used to collect them; oxygen (black) and acetylene (maroon).

One of those "must get round to doing that sometime" tasks hanging over RRRG has been to collect a couple of cylinders of oxygen and acetylene with which to power our cutting and welding equipment. Although there is a BOC distributor just across the A6 from Peak Rail's Rowsley South site they have limited opening hours which are somewhat inconvenient for the regular on site RRRG volunteers.  Tim and I decided we would head up to Rowsley last Friday night in order to be on site in the morning ready to collect the gas. So, shortly after 4 o'clock on Friday afternoon I hit the road to drive the 170 miles or so from Reading to deepest Derbyshire whilst Tim got a train from Peterborough to Matlock, where I would meet him. I got delayed by the usual Friday traffic whilst Tim got delayed when 66008 decided to investigate the ballast on the Midland main line near Duffield. (I did however make it through Bletchingdon on the A34 without incident after my two year anniversary earlier this month, and once on site, Dave was as helpful and complimentary as ever that my latest car was retaining its factory-fitted styling so well).

The cylinders are now in situ at RRRG headquarters. One of the main uses we will have for them is to heat up some bolts and pins on our spare bogies which are absolutely stuck fast and won't shift any other way.  In particular there are some arms secured by pins and bolts which prevent the traction motors being removed from the bogies and we want to either free these off, or if necessary, cut them off (we have plenty of spares) in order to free the motors for removal to Bowers for overhaul.

Aluminium air intake manifolds destined for the ex-50008 power unit. The foreground example awaits the removal by wire brushing of years of dirt and grime to reach the standard of the background pair, which Dave Rolfe described as "Rolls Royce quality"!

After treatment with the wire brush, Tim and I set about red oxide primer coating of the manifolds we treated that day, as well as returning to some that other RRRG volunteers had already treated, just to ensure that "Rolls Royce finish"!

With the main excitement of the morning over, and after a few steadying cups of tea and brunch at the Peak Rail cafe, Tim and I set to work on wire brushing and red oxide painting of a number of air intake manifolds destined for the ex-50008 power unit. Chris Bodell's nascent music career meant he was playing a gig in Bakewell on Saturday night so he went home to practice and took his leave of us. Tim was diagrammed for transporting teenagers to a roller disco in Peterborough that evening and so, despite building up some momentum on the inlet manifolds, we reluctantly packed up and I drove us the 100 or so miles back to Peterborough, where the teenagers were transported and Tim and I undertook a mutual debriefing session in The Moorhen at Hampton Vale (Tim's local). Sunday was spent doing more work on the soon-to-be-launched new RRRG website (of which more in due course) and I then hit the road for the final time back to Reading, which was covered in a personal best time of 1 hour 50 minutes and brought my mileage for the weekend to a touch short of 400. But it's all good fun (allegedly!).