Adrian Spencer of the Cotswold Mainline Diesel Group, a good friend and contact of RRRG, volunteered to construct a modernised version of the CU5 control unit for use in 50029 and 50030, as RRRG has none and these items are rarely made available for sale by other groups.  The work to build one unit has now been effectively completed barring minor cosmetic details such as securing the wires to the circuit boards with cable ties.  The replacement unit has been deliberately designed to physically resemble the old unit as much as possible such that it will be easy to mount into the existing space in the electrical cubicles.  However the insides employ a modern microprocessor to replicate the functions of the original unit - this is necessary because the original Norlog integrated circuits are no longer made and no modern equivalent apparently exists.  The original unit contains many auxiliary components which aren't necessary in the new build because the microprocessor duplicates their respective functions.  Three printed circuit boards on the old unit are reduced to one in the new unit.  A number of diagnostic LEDs are included to indicate which contacts are closed at any given time - this will enable the correct functioning of the new unit to be monitored.  The new unit also employs optical connections to isolate it from interference from other cubicle equipment. 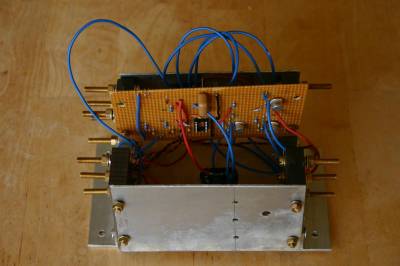 The CU5 radiator fan unit basically decides when to increase the speed of the radiator fan, and depends on the temperature of the power unit cooling water. The fan initially runs at a low speed, and the CU5 switches in three faster speeds as the water temperature increases, via banks of resistors in the roof of the passageways past the radiators, placed there to keep them cool. The programming of the microprocessor in the new unit can be altered if it turns out not to perform as the original did.