The odd one out, I am the Dutchman in our Group.

My first encounter with the wide variety of British Rail diesel locomotives back in 1971 made a lasting impression upon me. I come from a country where the majority of lines were electrified by the time I was born (we're talking 1954 here). High-revving diesels, slow-revving ones, they all got me carried away. Soon however I got acquainted with the phenomenon of withdrawals, locomotives and even complete classes being scrapped. 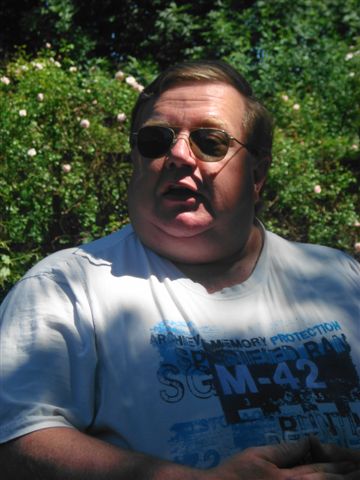 When the time came for the Deltics I joined DPS but being a poor student then there was little I could do. A visit to Swindon Works and the scrapyard where Class 52s were in the process of being cut up brought me to the vow to act at some point in future when I would be in a position to make a difference. In March 2002 that moment had arrived and I was a member of RRRG when the name still had to be thought of and the bid for the "Twins" still had to be put in. Since then I have showed up the odd day in the year but contributed by means of funding.

Professionally I have been a geography teacher for 19 years, then suddenly packed it in and became an international lorry driver which took me to the UK and Ireland on weekdays. As such I have seen all motorways, country roads and cul-de-sacs.

In the UK they see me as the English-Dutchman whereas at home I am looked upon as the Dutch-Englishman. To illustrate that dilemma I love Fish & Chips but am horrified at the thought of sprinkling vinegar over the chips. Holland being the country for lager, I do love a good pint of cask conditioned real ale. All the more so after a day's work at Rowsley South. As for many of us, I am in this Group for life!

Indeed! ...Your membership matters a lot to us!  I handle membership enquiries and administration matters including persuading people to renew their membership.