Andy Rowlands
Working party news
Ian Kemp, Peter Carter and Dave Rolfe have been finishing off fitting pipework onto the ex-50008 power unit, and have started removing the injectors for inspection, before they go off for overhaul. Dave has been overhauling, cleaning and temporarily fitting items onto the brake frame so we know where everything goes. They will need removing to get ...
Tags:
work party refurbished parts spares December 2018
Continue reading
1833 Hits
0 Comments

Andy Rowlands
Working party news
The No 1 end cab of 50030 showing various patches done over the past few weeks. Hot summer weather is generally a good time to attend to jobs like these.
Cabside rot is the bane of all Class 50 owners. Drainage channels from the side windows in the cab become blocked and allow water to build up. We patched ours up a few years ago but the problem is starting to come back.
Cab footsteps are another troublesome area although not nearly as bad. Note the SmartWater sticker: we in RRRG have been using this service for a number of years now and we highly recommend it as a cheap and effective anti-theft deterrent for all locomotive owning groups.
​Mark Burrows, his son Robert and I were on site today. Mark and Robert carried on scraping, bashing, fibreglassing, filling, sanding and priming around the no.1 cab of 50030, while I had a good tidy up on the shelves opposite the electrical cubicle, then Mark helped me fit the three rad resistor backplates along one side of the rads. Apart from th...
Tags:
Peak Rail Bodywork work party July 2018
Continue reading
2553 Hits
1 Comment 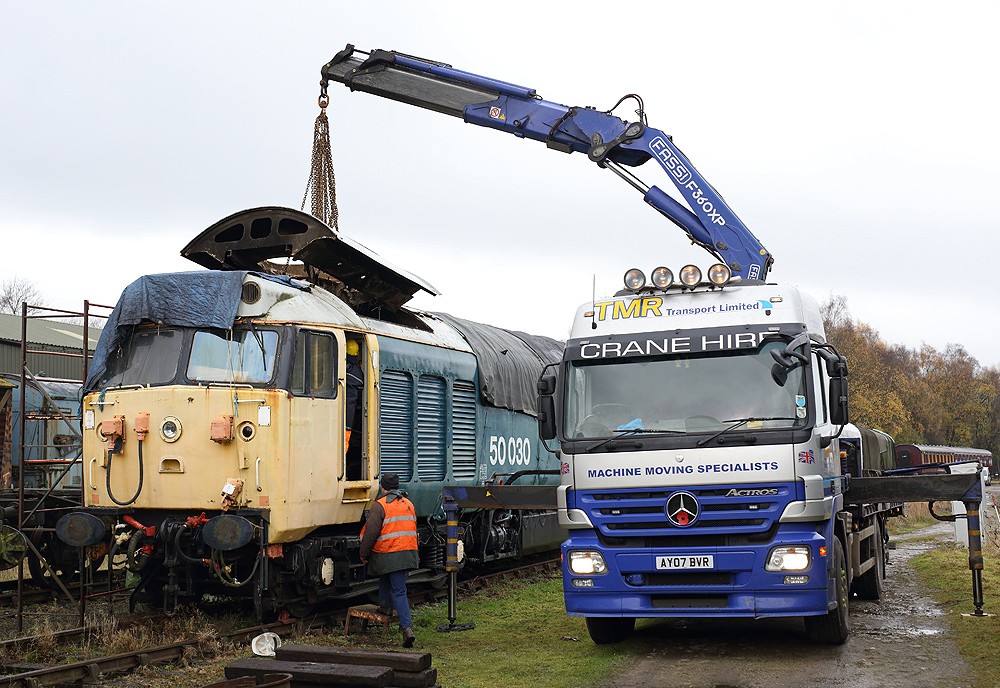 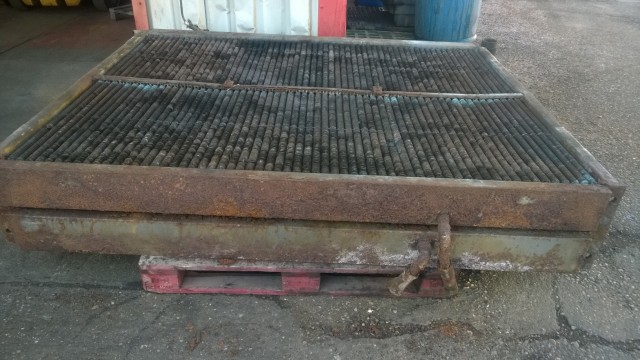 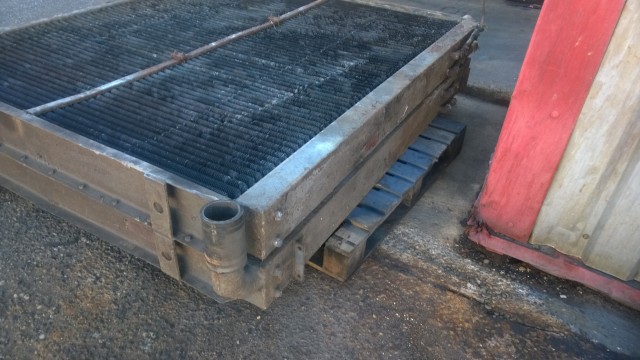 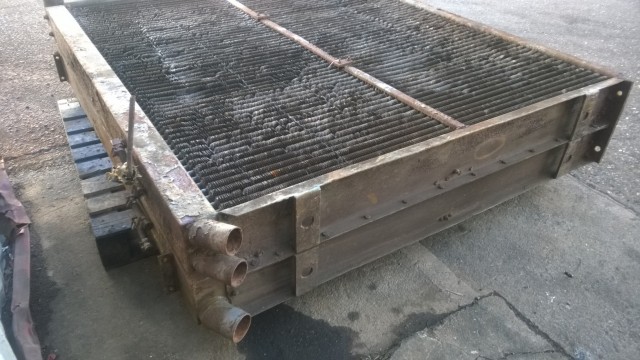 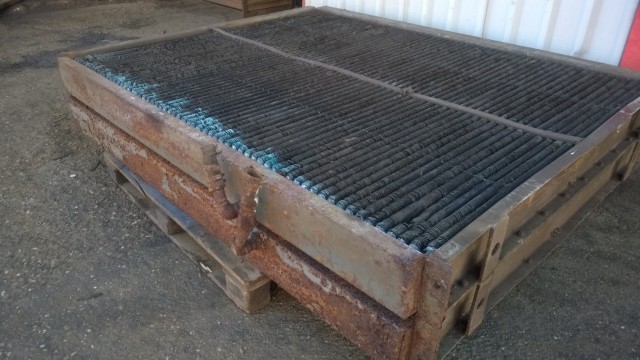 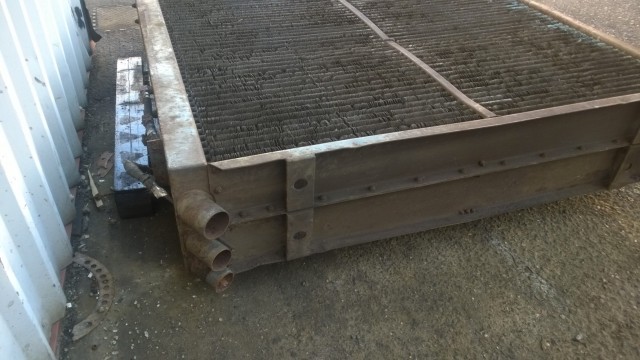 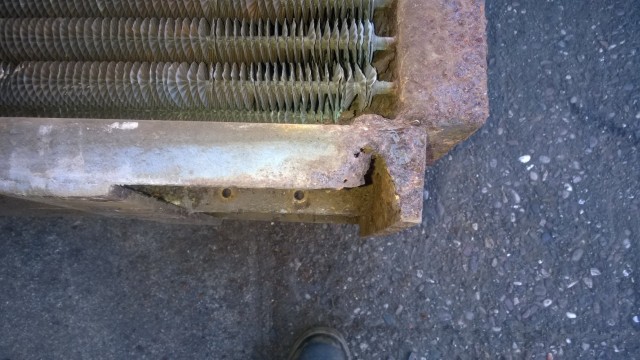 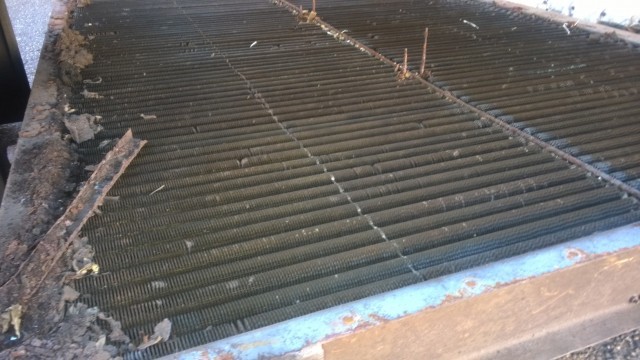 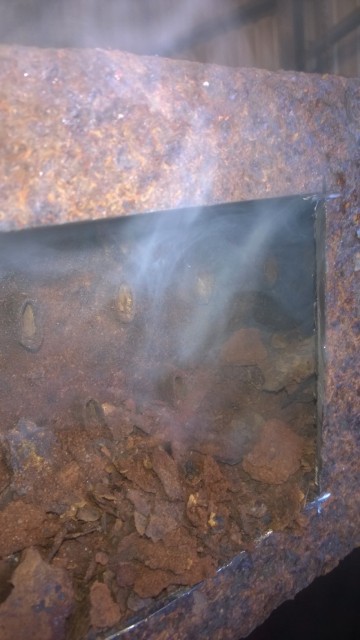 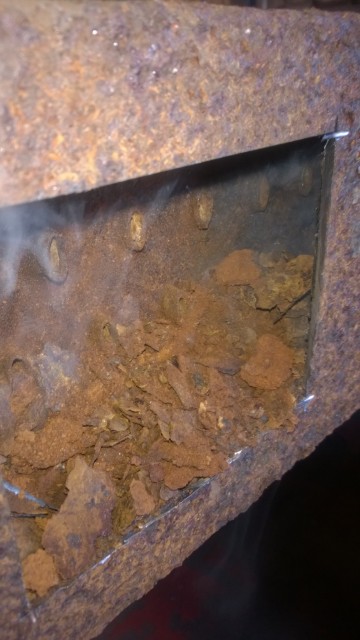 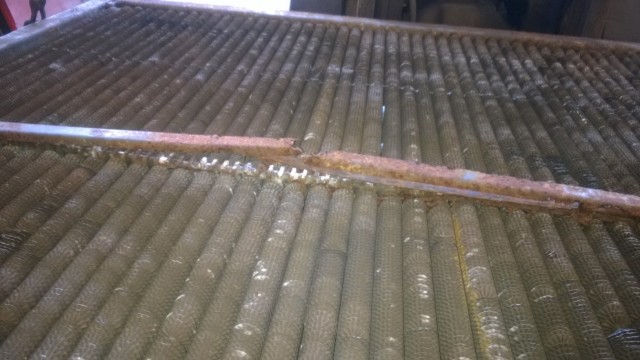 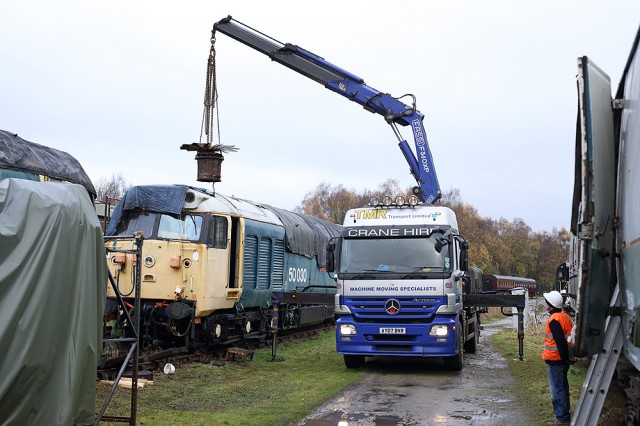 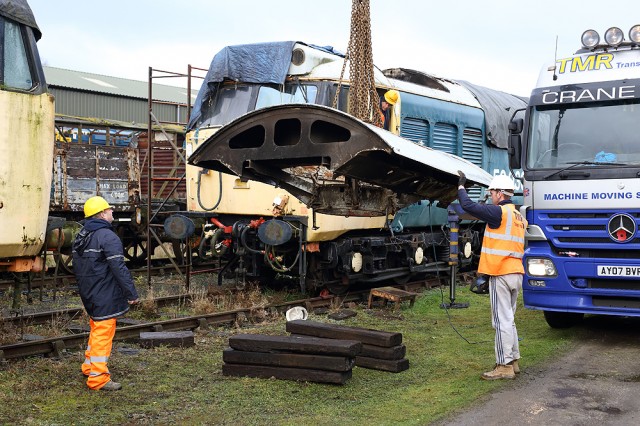 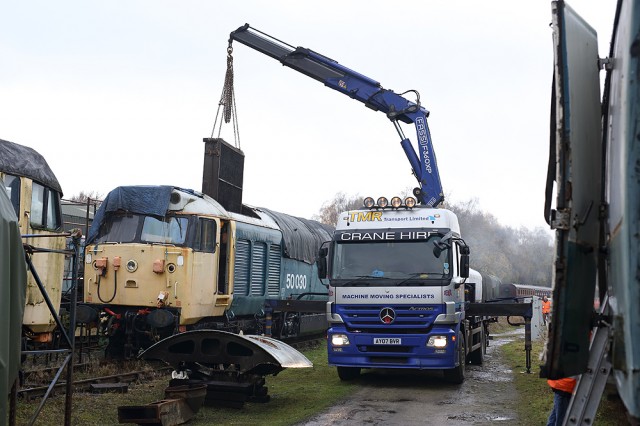 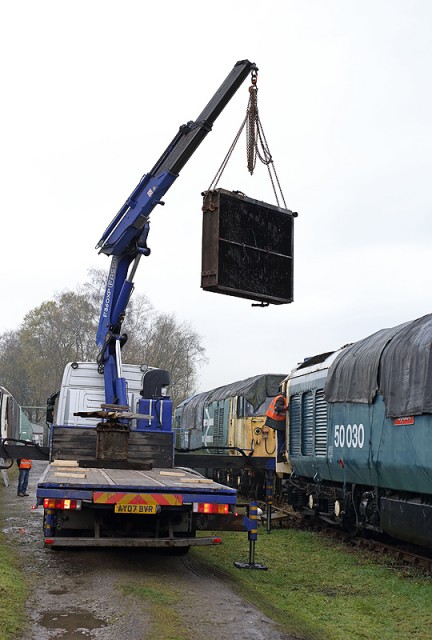 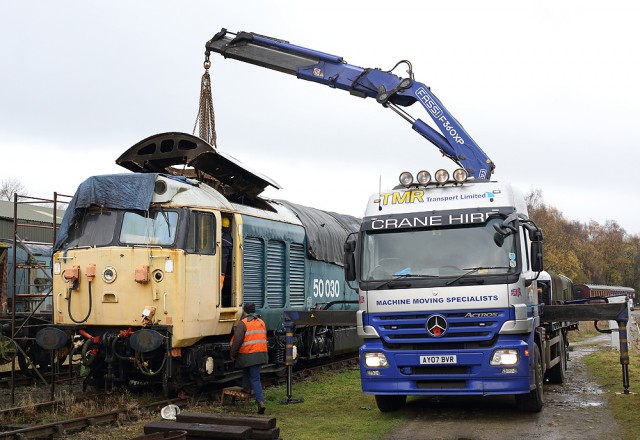 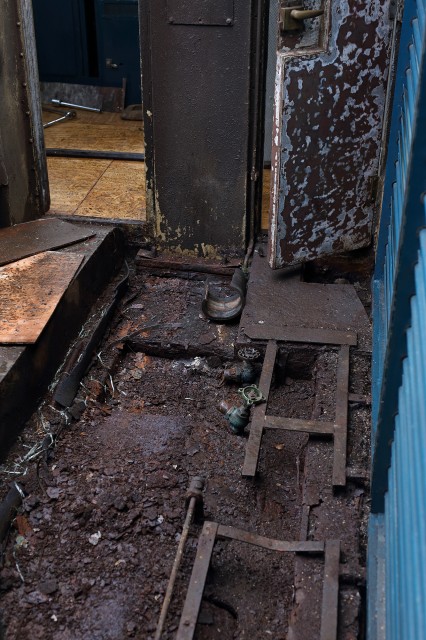 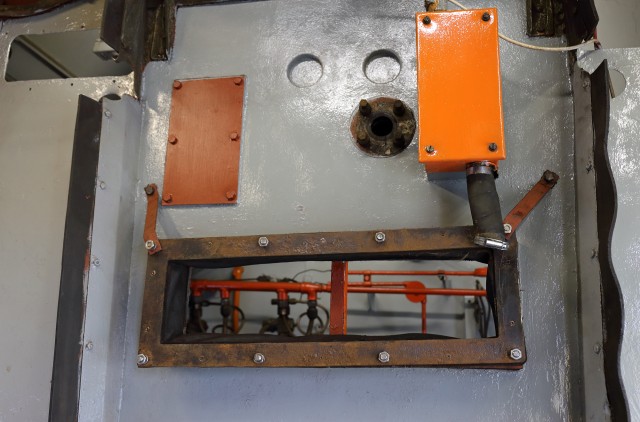 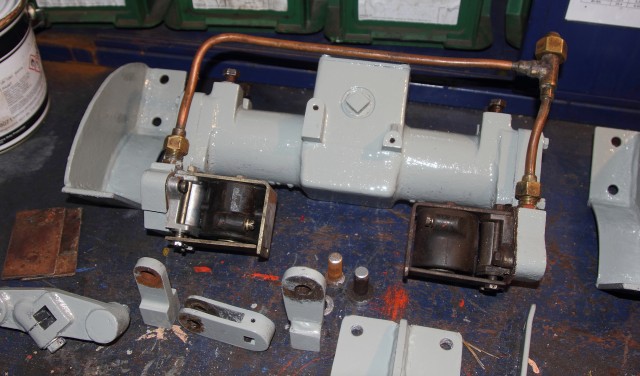 As we approach the halfway point of 2017, it seems like a good time to to look back at what RRRG has been doing this year and our progress to date.The major work (and expense!) this year has been on the overhaul of the radiators for use in 50030 as we progress towards at least being able to fire up the engine in this locomotive. Along ...
Tags:
2017 June work party refurbished parts Merchandise
Continue reading
2393 Hits
0 Comments

A host of updates coming soon...

Dominic Jackson
Group news
Apologies for the radio silence folks.  RRRG hasn't shut down and ceased to exist.  It's more that we've been busy both on group matters and with our own personal lives.  A number of updates should follow later today.
Tags:
2016 work party July Peak Rail Group news
Continue reading
1231 Hits
0 Comments

Andy Rowlands
Working party news
Refitted oil (pink) and water (blue) pipes leading to the heat exchanger recently refitted to the 50008 power unit.
The oil filters and strainer were refitted to the power unit recently. The grey caps above the blue water pipe are the tops of the oil filter housing. One of these contains the strainer with the rest being filters.
Dave Rolfe continued to make progress cleaning out the air filtration compartment between the radiator and engine rooms.
The new CU5 radiator fan control unit was test fitted into 50030 and is seen alongside the CU7 ETH field detector unit.
On 26th July Pete and Ian rifled through our extensive spares collection to find pipework needed to refit to the ex-50008 power unit as its rebuild continues. I carried on refurbishing and painting the electrical cubicle doors and framework. I also rediscovered a large quantity of Class 56 electronic units that we had speculatively bought from scra...
Tags:
2015 August Peak Rail Rowsley South work party
Continue reading
1940 Hits
0 Comments

If you've been following RRRG for some time, you might know that we have in our spares stock a genuine Class 50 reverser and a Class 37 example, which is similar but not identical to the Class 50 part.  We had removed the genuine 50 reverser in order to use it as a template to modify the 37 item to Class 50 spec, and in the meantime the ex-37 reverser was installed in 50030's electrical cubicle so that I could judge how long to make the wiring whilst rebuilding the cubicle.

On Sunday May 25th I disconnected the main cables from the back of the ex-37 reverser, and with Dave Rolfe's help, got it out of 30 and into the container. I cleaned the main power contacts on the the proper 50 reverser and labelled each contact bar while Dave was finishing drilling out sheared bolts around the removable grille that gives access into the No.1 end clean air compartment. Whilst cleaning I happened to notice the auxiliary contact blocks appeared to be facing the wrong way, so I went to Washwood Heath during the week to check 50008 Thunderer, and found they had indeed been refitted the wrong way round after we had taken them apart to make a replica second set to modify the 37 reverser for use in 29.

Whilst working around the cubicle area in 50030, I was impressed by work that Mark Burrows has been doing to restore the cable conduits for the traction cabling to the main generator.  This has been a laborious task using the best parts of conduits salvaged from 50023 and 50040 before those locomotives were scrapped a few years ago.

On 1st June Ian, Pete and Dave refitted the decompressor plugs into the power unit, then spent the rest of the day cleaning parts of the power unit ready for painting.

On the same day, I removed the auxiliary contact blocks from the Class 50-spec reverser and fitted them the right way round, in the process realising that the internal cams had been rotated out of their correct positions, so they wouldn't open and close in the correct sequence. The afternoon was spent getting them back into the correct alignment.  Now that the reverser has been properly adjusted, my next task will to fit it back into the electrical cubicle in 50030.

A good attendance this last weekend, others will contribute their own reports in due course. New volunteer James Andrews arrived on Saturday for his first working party and we were also blessed with the presence of Paul Sturm on an impromptu trip from the Netherlands. Dave Rolfe was the usual permanent fixture on site as Tim and I arrived at about midday on Saturday. Later on Sunday we were joined by Mark Burrows, Ian Kemp and Peter Carter.

Tim, Paul and I concentrated on the continued cleaning of brake rigging equipment where a large stash was extracted from storage:

Dirty brake rigging to be cleaned by Paul Sturm and myself.

Although not in the "Chris Thorn" level of restoration skill the wire brushing of these took much elbow grease and many cups of tea and ready meals during the day. The gradual accumulation of brushed parts into a pile for Tim to hone with the smaller drill was quite satisfying:

Brake rigging cleaned with large wire brushes by Paul Sturm and myself, ready for Tim to hone with the smaller drill.

Meanwhile Dave and James had removed one of the adjustable radiator louvres from 50030 with a view to getting the shutters to work again. The linkage was seized utterly solid and heavily rusted. However Paul brushed it up and when Ian arrived on Sunday their combined efforts made for an amazing transformation:

The rusted, seized radiator linkage after brushing up by Paul Sturm and treatment by Ian Kemp with a little used engine oil.

Elsewhere, Dave, obviously heartened by the success on one radiator grille, removed the other one for similar treatment (but did reinstall it before the end of the weekend).

Dave repairing the other opening radiator louvre on 50030 following attention to its companion the previous day.

All in all this was a very productive weekend and I look forward to the next working party.

We will be having a work party on site at Rowsley South, Peak Rail, over the weekend of 25-26 February. There will be plenty to do for anyone wanting to come along even as just a "pair of hands". RRRG members will be on site from around 09:30 on Saturday morning and everyone is welcome to attend - member James Andrews has already confirmed he will attend his first work party on that weekend and we would love to welcome other members, whether this will be your first or fiftieth working party! Use the comments on this post if you would like to let us know you're coming along. Tim and I will both be there too.

A few photos of work taking place on brake rigging equipment.  We have decided to move the bogie overhauls up our schedule as they are mostly cheap to do (we can do much of the work ourselves) and it frees up financial resources to spend on overhauling electrical equipment and preparing for the lifts we will need to do to swap power units between our locomotives.